With well over 250 million people who practice Qi Gong worldwide, you might be wondering what is Qi Gong and why all these people are practicing it.  You are not alone.  Once you try it, you will understand why people love qi gong.

If you have tried qi gong, you would have already felt the results of qi gong for your body.  So, to understand qi gong more fully or to find out why so many people are enjoying it, let us start from the beginning.

The Origins of Qi Gong 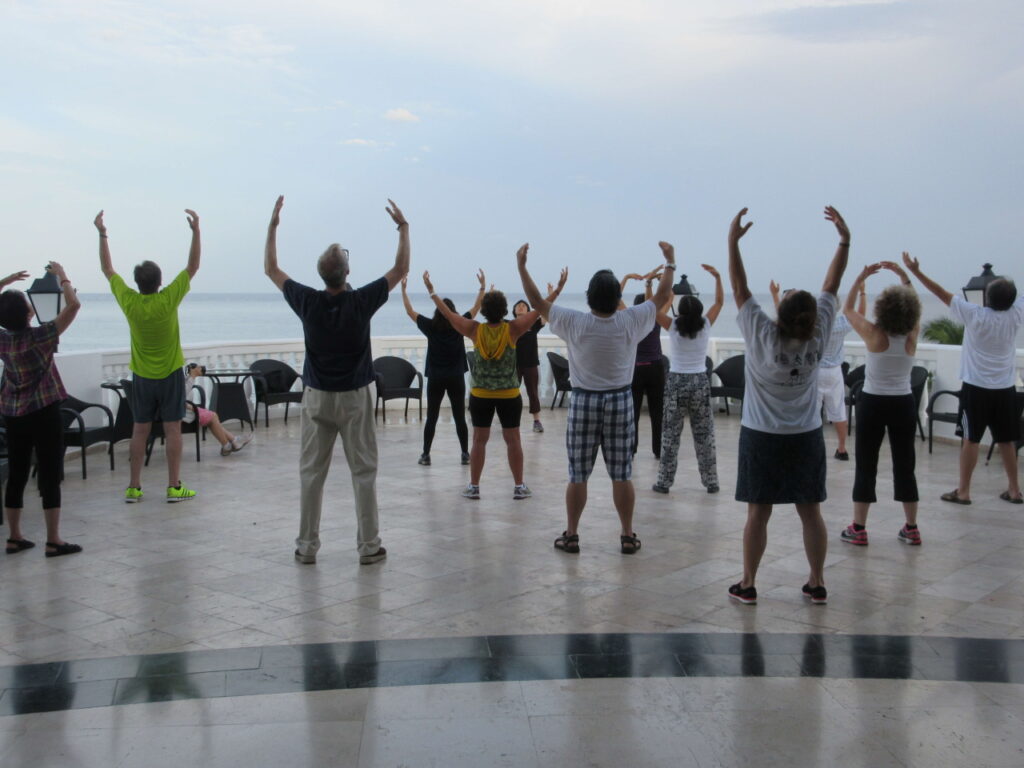 Qi Gong is pronounced “chi kung”.  Qi translates to “Energy or Life Force” while Gong translates to “Work or Training”. The word “qi gong” is used to refer to energy related training or practice that originates from China. It is a broad term which covers many forms of exercise or movement meditation practices that involves Qi.  Qi gong is an umbrella term just as the word “kung fu” is an umbrella term used in the west to refer to all martial arts that originates from China.

A qi gong form is a series of coordinated and flowing movements which requires a person to focus on body posture, movements, breathing and mental thoughts.  Qi gong activates the naturally occurring physiological as well as psychological mechanisms of self-repair and health recovery. So far, there are over 75 forms identified in the ancient pictogram literature.  These ancient qi gong forms provide the origins to the thousands of qi gong forms practiced today.

To understand the various ancient forms, it is best to categorize the forms into Hard Qi Gong or Soft Qi Gong.

Hard Qi Gong is a skill used to train martial artists. It trains the body to withstand blows that would normally incapacitate a person.  Practicing hard qi gong involves meditation and breathing techniques to allow the body to train under adverse conditions to toughen up the muscles, skin and bones. An example of hard qi gong would be Shaolin monks breaking bricks on their heads or bending a spear with their throat.

The focus of soft qi gong is on the internal mechanisms of maintaining and recovering our spiritual, mental and physical health.  Within the practice of Soft qi gong, there are two types or categories:  Static Qi Gong and Dynamic Qi Gong. 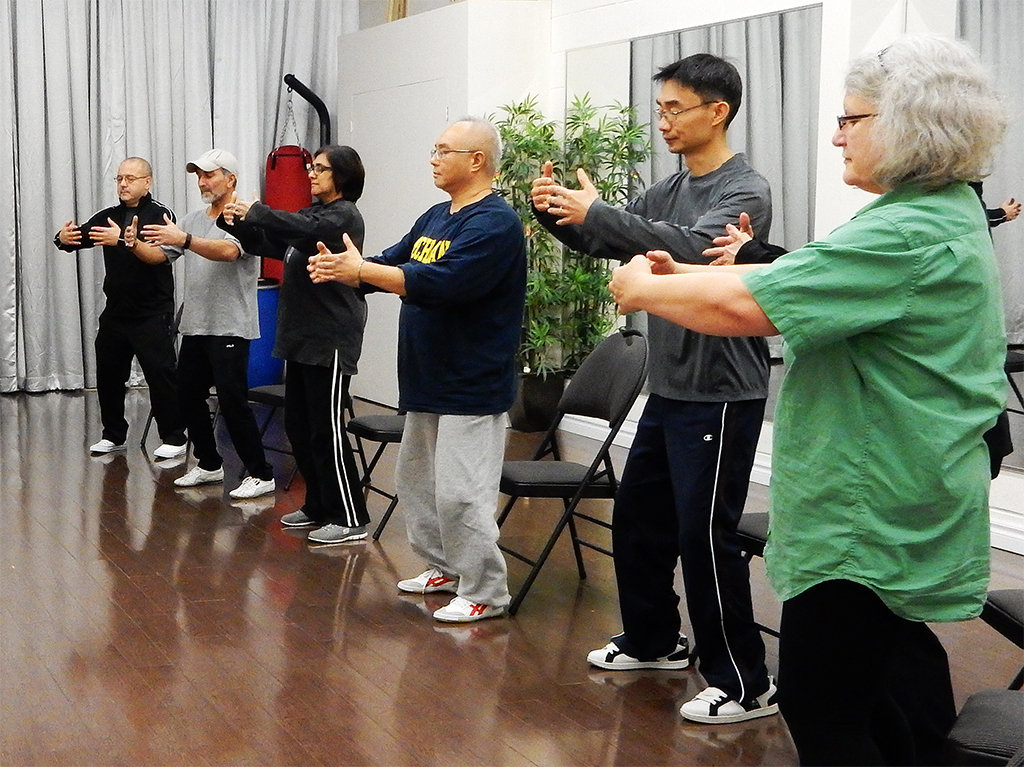 Static Qigong typically requires little or no motion of the body and includes sitting and standing exercises. There are multitudes of varying forms of qi gong practices in this realm, they are sometimes referred to as Medical qi gong or Meditative qi gong.

The movement of Qi (life force or energy) within our body is an unconscious occurrence which our body does naturally to remove energy blockages every minute of our life. However sometimes blockages occur that cannot be readily removed because the Yin and Yang in our body is out of balance.

Static qi gong practices typically aim to balance the Yin and Yang in the body to cleanse, re-energize, balance and harmonize the internal organs.  When our internal organs are functioning well, they help our Qi or energy flow and help us prevent or remove the blockages.

Qi helps us stay healthy, prevent illnesses and enhance the body’s natural healing process. Meditation and visualization plays a vital role in training the mind to direct and regulate Qi (energy flow) in the body.

At our studio, we practice:

When practicing dynamic qi gong movements, slow and natural breathing coordinated with body movements will stimulate the energy flow through your body.  In addition, the soft tissues of the body will get a good work out when the postures and movements have you contorting gently to stretch specific muscles, tendons and / or ligaments.  These slow moving motions end with specific body postures around specific meridian lines of the body so that each meridian is cleared of any blockages which may adversely affect health and cause illness.

Throughout the form, we lead people to focus on relaxing and breathing slowly and gently into the dantian (diaphragmatic breathing) to open up the body for improved circulation and delivery of oxygen to all the deepest recesses as well as distant extremities of our body.

Physically, many of the qi gong movements incorporate deep squats or intentional tensing of muscles in order to strengthen the body.  Qi gong enhances our muscles and soft tissue not only energetically but physically through stretching as well as strengthening techniques.

In addition, the qi gong forms use phonation of sounds to amplify energy to create a vibration through specific meridian lines which not only releases the blockages but it also gets us to focus on the production of the phonetical sounds while remaining aware of the vibrational effects.

For the mind, qi gong practice engages our mental focus to calm and relax our mental state.  The forms are challenging enough that we need to be present with our bodies to perform movements and enter specific postures designed to work around meridian lines of our bodies.

Qi gong movements are practiced slowly for a number of reasons: 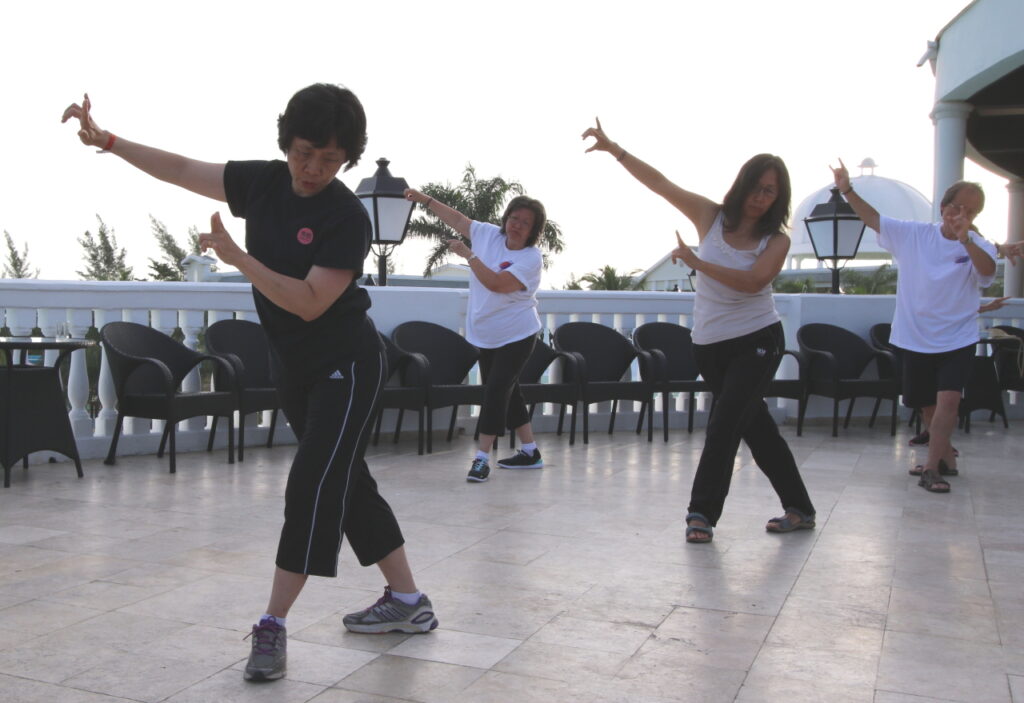 The goal of Qi Gong is to strengthen and balance the mind, body and spirit.  Strengthening our whole self helps our body’s natural ability to combat illnesses and improve physical and mental functioning. Continued practice of Qigong can help improve the following conditions:

Practicing Qigong regularly improves our overall well-being.  It is a natural and holistic way to be in charge of our body physically and emotionally.  The more one practices Qigong, the more Qi you will develop internally and the more energetic you will feel.

To quote Hua Tuo, patriarch of Chinese medicine and early Qigong master (second century AD), “Just as a door hinge will not rust if it is used, so the body will attain health by gently moving and exercising all of the limbs”.

Come join our Qi Gong class today to learn this ancient practice for health and vitality.