The routines of Wu style share very similar sequences of moves and names to Yang style tai chi.  In Wu style, the stances are taller and the steps are shorter.  This style of tai chi is well-suited for beginners and people with physical difficulties with low stances or physical disabilities which make it difficult to perform a wider range of motions.

While the motions may not be as extensive or deep, the physical health benefits and its effectiveness as a form of martial arts equals and may exceed some of the other styles of tai chi.

When Wu Quanyou taught tai chi to the common people,  he focused on the smaller movements with a few modifications which he had made along the way. Wu Quanyou’s son Wu Jianquan (吴鉴泉1870–1942) made the majority of the modifications and refinements to the form and promoted this new form of tai chi as Wu style.  And, it is Wu Jianquan who is credited as the founder of Wu style tai chi. 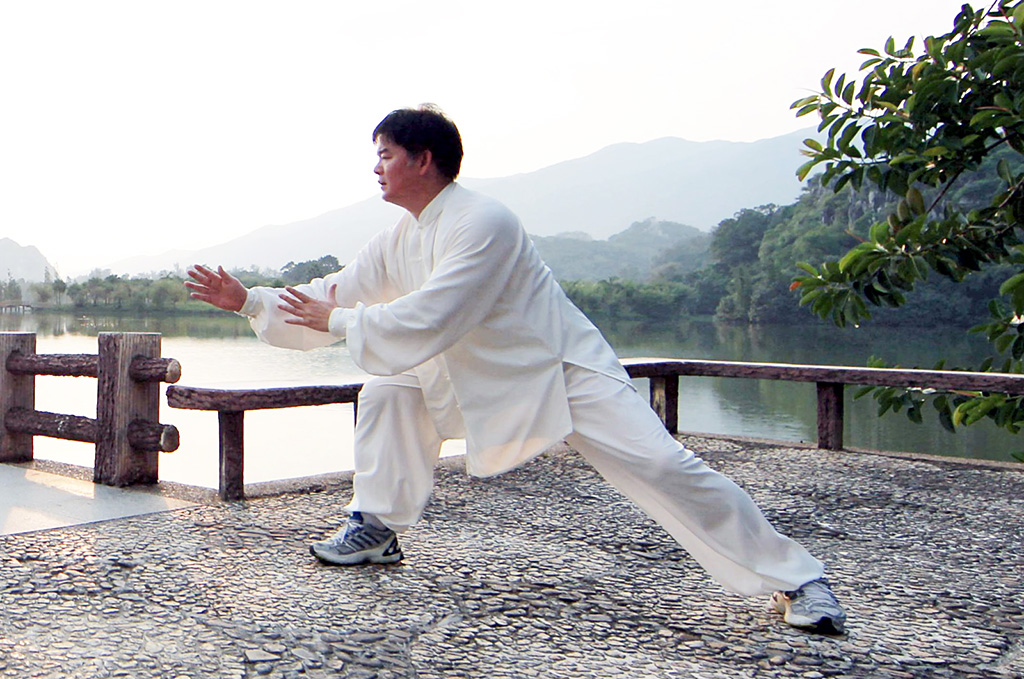 Even though the movements in Wu style share the same name and many sequences as Yang style tai chi, there are two very important and key differences: stance and posture.

Wu style requires a square stance with both feet pointing forward.  It is a square stance because the width of the stance is equal to the distance between the front and back foot.  This distance is measured by the heel of the front foot to the toe of the back foot and it needs to be equal to the width of the stance to create a square space under the body. This is a shorter and taller stance which means the reach of the practitioner is reduced.  To compensate, the Wu style posture is the key to creating reach while grounding the stance.

The Wu style tai chi posture is commonly described as “Slanted but Straight”.  The key characteristic of Wu style tai chi which everyone notices is the posture of the style.  Instead of standing upright, this style is practiced with the body leaning forward while the back is kept straight when advancing.  The body and rear leg form a straight line by having the rear leg extended with the body and head leaning to the front.  This gives the body both the slanted posture while forming a straight line along the back from the head to the rear heel.

When moving, the practitioner alternates between leaning forward and tilting backwards with each step which is unlike the other tai chi styles where the body remains upright with each step.  This rocking body motion of the Wu style is described as “willow tree blowing in the wind”.

The stance and posture of Wu style work hand in hand to achieve the desired reach without compromising the body’s centre of balance. For the leaning posture to work, the back foot must point forward allowing the body’s energy to travel down to the rear heel to anchor the whole body. This detail in the footwork is critical for Wu style practitioners to achieve balance and grounding of the stance. 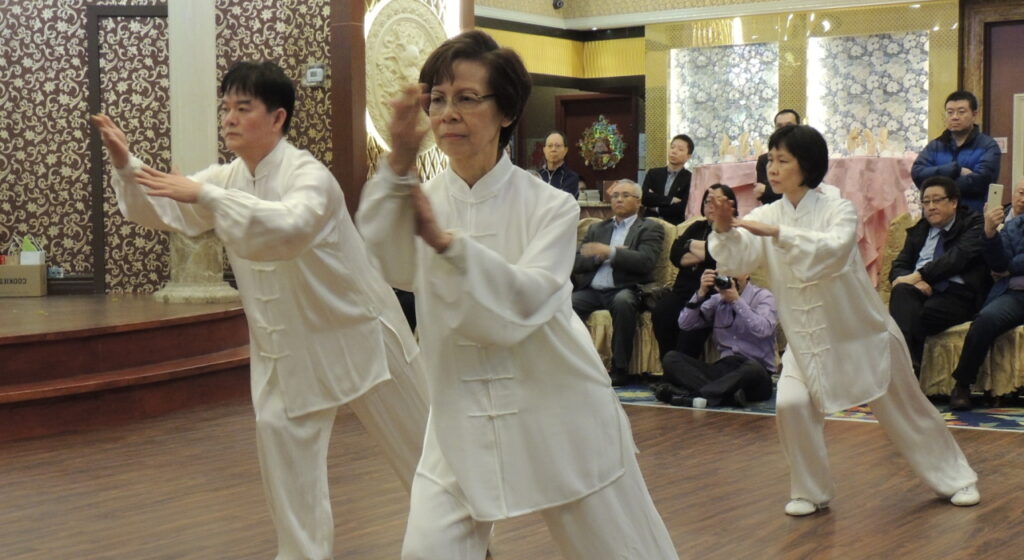 The unique movement of leaning forward and tilting back requires very good core strength to hold the body straight but leaning. I personally feel that Wu style forces the practitioner to engage the core in every move, not allowing one to be lazy and forget about the core.

When performed correctly, the arms and legs are fully extended from the heel up to the hand, exercising and stretching the whole body as well as the limbs so both inner core and lower back muscles are engaged.  This style is extremely effective for strengthening the core of the body.

Learning Wu style might feel a bit challenging at the beginning due to its unusual posture and footwork. At our studio, we spend quality time in our introductory Wu style classes working on the basic footwork instead of just rushing to learn the moves.  This provides all students with an opportunity to gain a deeper familiarity with the stance and posture before applying it within the movements.

Once there is a good grasp of the basics, Wu style tai chi becomes a joy to practice. And, with the slow rocking motion of this style, the rhythm of the form creates a calming and meditative effect which is the charm of this tai chi style.