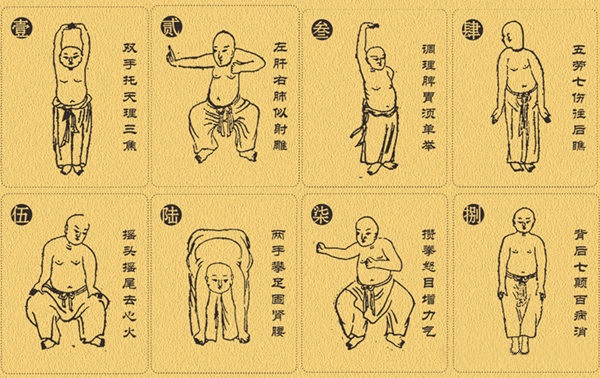 Qi gong (pronounced chi kung) is an ancient practice which originated from China over 5,000 years ago and pre-dates both tai chi as well as TCM (Traditional Chinese Medicine).  The term qi gong is made up of the word Qi which translates to “Energy or Life Force” and the word Gong which translates to “Work or Training”.

Qi gong has a long and ancient history with influences from Confucianism, Taoism, Buddhism, traditional Chinese medicine and martial arts along with modern concepts of health, science, meditation, and exercise. Thus, Qi gong is a broad term which covers many styles or forms of exercise and meditation practices which involve energy related training.

Due to the broad nature of the term, the Chinese government established the Chinese Health Qigong Association. The association formed working committees to compile, research and publish standardized versions of the most popular qi gong forms practiced.

The first 4 qi gong forms to be published by the Chinese Health Qigong Association are:

The next 6 forms to be published are:

These standardized qi gong forms consist of coordinated and flowing movements which require a person to focus on body posture, movements, breathing and mental thoughts.  These forms are categorized as “Soft” and “Dynamic”, as opposed to “Hard” and “Static”.  To understand these categorizations, read the explanation about the different types of qi gong here: What is Qi Gong?)

As a whole, they are commonly referred to as “Health Qi Gong”. At Ji Hong Tai Chi Mississauga studio, we teach 7 of the above 10 health qi gong sets as part of our qi gong curriculum.

The first 4 forms to be published by the Chinese Health Qi Gong Association are the most ancient and well-known qi gong sets that are practiced today.

Ba Duan Jin is the most common and widely practiced form. This set includes stretching, strengthening, internal qi flow as well as meridian work to stimulate internal organs. In just 8 simple moves, this set is quite effective in achieving all of these results while being straightforward to learn and perform. It’s not a surprise that many martial arts schools use this qi gong set as a warmup routine to their regular training. In fact, Ba Duan Jin is a good warmup routine for almost any sport.

Liu Zi Jue is the most unique qi gong form of these first 4 forms. It is the only set where movements, the breath and the verbalization of guttural sounds are applied to stimulate specific internal organs. The physical movements are secondary to the sounds and breathing of this form. When practicing this set, you can easily immerse yourself into a meditative mode as you feel and enjoy the reverberation of the sounds and your own breath.

With only 6 moves, this is the easiest set to learn and remember. It’s not even necessary to move your feet once you start. However to fully appreciate and gain the benefits of this exercise, you need to let go of any inhibitions and allow the breath and sound to flow naturally. For some people, Liu Zi Jue may take a little time to become comfortable with producing the sounds and fully experiencing its charm. 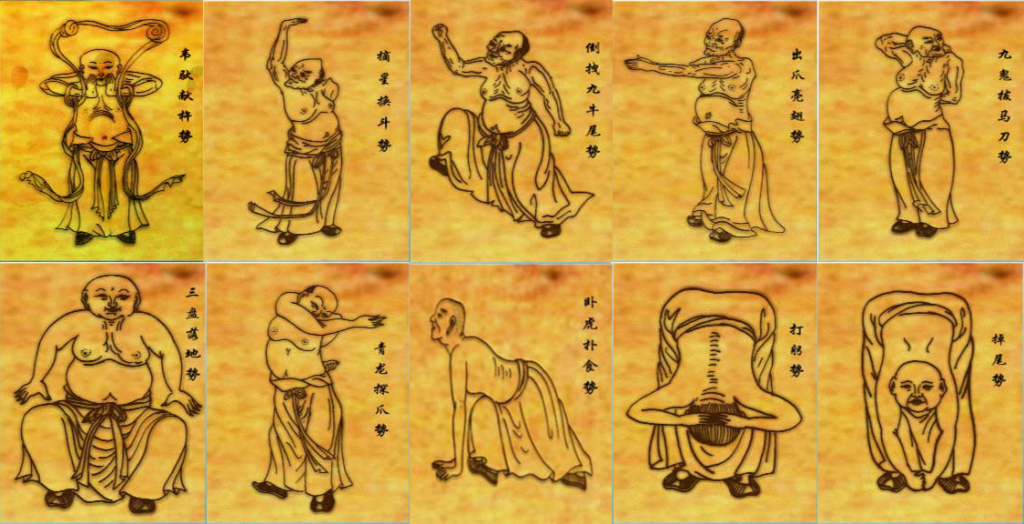 Yi Jin Jing is considered the most difficult among the sets. It is an ancient set so it is well known.  However, it is not commonly practiced due to its difficulty level and risk of potential injury if the practitioner does not warm up adequately or practices the movements incorrectly. The exercises involve gently moving the body into positions which twist and torque the torso and limbs.  Holding these positions and maintaining a gentle tension on the tendons and soft connective tissue slowly releases the contractures in our muscles and tendons.

Wu Qin Xi is probably the most fun set to practice as the moves are designed to imitate the movement of 5 animals:

It is well known and popular largely due to its association with the legendary Chinese physician “Hua Tuo”. The exercises involve mostly stretching, balance and agility with each animal consisting of 2 movements that correspond to the yin and yang internal organs. The moves are not physically challenging and can be practiced by anyone to improve one’s general health. This set is quite well received at our studio, as the moves are fun and interesting.

In addition to the first 4 sets described above, at Ji Hong Tai Chi Mississauga, we also practice Ma Wang Dui, Da Wu and Taiji Health Stick. All of the 7 qi gong sets selected for practice at our studio are done standing up. The Taiji health stick qi gong set is the only set that requires equipment.  The health stick is a 1.2 metre long stick.

Qi gong can be practiced anywhere. Qi gong is the most convenient, economical and safe exercise that you can do to improve your health. The duration of each qi gong set can range from 15 minutes to 30 minutes. You can shorten or lengthen the practice by decreasing or increasing the repetitions per move. When you have limited time, it is best to perform fewer repetitions slowly as opposed to more repetitions quickly as slow movements help achieve optimal results.

Join us and try a qi gong class to appreciate the simplicity yet effectiveness of this exercise.