The Taijiquan Treatise written by Wang Zong Yue is by far the most accurate and well written piece of literature which describes and explains the founding principles of Tai Chi. The above quote is the first paragraph in the 360 Chinese character literature piece succinctly capturing the essence of tai chi.

In this blog, I will make an attempt to explore the meanings behind this well-known piece of tai chi literature.

Tai chi as a philosophy is based on oneness with nature and oneness with the universe. In the beginning, just like the universe, it is boundless and limitless. The universe is governed by the relationship of opposites co-existing and complementing each other.  This philosophy is the essence of Yin and Yang. Examples of yin and yang include: soft and hard, flexion and extension, stillness and movement, empty and full, internal and external and so on. The co-existence of Yin and Yang is how balance is achieved and maintained in nature.

Tai chi is a martial art which focuses on balance through the application of Yin and Yang. Every movement and every posture must adhere to the principle of yin and yang. Keeping the yin-yang balance is difficult enough while standing still. It becomes even more challenging to maintain this yin-yang balance when in motion.

If you have been practicing tai chi with us for a while now, you would be familiar with practicing yin yang concepts.  For instance, when we are moving our hands forward, there must be an equal and opposite intention. The balance achieved in tai chi movements are often felt but not seen.

Tai Chi in Motion Divides and in Stillness Unites 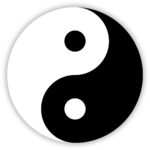 The yin yang or tai chi symbol embodies the philosophy of yin yang perfectly with a complete and whole circle divided exactly into half white (yang) and half black (yin). The two curved halves contrast and complement each other; one cannot exist without the other. The single dot within each half signifies the seed of the other. For example, success is born from failure and happiness arises from sadness.

When static, the symbol is whole and complete representing unity or oneness.  It is a state of peace, harmony and tranquility. This is how we achieve stillness when practicing tai chi as a martial art.

Movement requires a change in the direction of force. As one force changes, it must be matched by an equal and opposing force to maintain the yin yang balance. Hence, motion initiates change resulting in the emergence of opposing forces.  These opposing and changing forces are represented in the yin yang symbol.

The tai chi treatise explains that tai chi in motion divides.  Movement or changes in force splits the stillness and changes the harmony or tranquility which once existed. When practicing tai chi, the aim of every movement is to use equal and opposing forces to continually maintain the complete balance or oneness of yin and yang.  The aim is to achieve stillness in motion.

Tai Chi in Flexion and Extension: Does Not Go Too Far Nor Fall Too Short

When pushing hands, the partners remain connected at the arms and hands. Each person attempts to upset the balance of the other person. In this interplay of push and pull, limbs will all have to move, flex and extend while keeping the yin-yang equilibrium of the whole body.

Typically in push hands practice, partners employ techniques to lure the opponent to over extend or flex their limbs. Too much flexion or extension of the limbs will weaken the structure of the whole body.  This creates an opportunity for an opponent to unbalance you. To be successful in unbalancing your opponent efficiently during these vulnerable openings requires the practitioner to flex or extend just enough and not fall short.

Push hands becomes an extremely interesting test of skills between two partners. Each person tries to adhere to the tai chi principles while waiting for the other to make mistakes.

Remaining soft on the outside is a state we want to maintain at all times when practicing tai chi.

Using the basic theory of yin and yang, we would apply the opposites of hard and soft in tai chi push hands. If we achieve softness on the outside, then the complementary state is to be hard or strong on the inside. We want to meet our opponent’s hardness with softness in order to transform and absorb the opponent’s force into our internal body. This energy or strength is stored deep inside until the right moment when it will once again be utilized and expressed as an external force.

When your opponent is soft, we simply follow and stick like a wet towel draped over the opponent. This state of sticking is meant to focus one towards “listening” or paying close attention to each of the opponent’s movements and intentions. To stick well requires true relaxation and softness of the outer body, complemented by an intense focus of the mind and strength of the inner core.

Practicing tai chi this way enhances our “listening” skills.  Listening to the opponent is a key component of push hands training. Listening allows us to detect vulnerabilities in our opponent which we can leverage to unbalance them.

In the tai chi state of readiness, we are always following and reacting according to the change in forces. As reflected in the yin-yang symbol, when the force in one direction increases, an equal force must flow in the opposite direction to maintain the equilibrium. In addition, the speed of reactions needs to mirror the speed of these changes as well.  Reacting either too quickly or too slowly means that the yin yang balance will be lost at some moment in time. This momentary lapse in equilibrium is an opening which would be exploited by the opponent during a Push Hands engagement.

These Kinds of Changes are Innumerable, but the Principle is Always the Same

Pushing hands with an opponent involves a constant change in distance, force and speed. The combinations of these changes are innumerable. In the midst of all these changes, there is only one goal. The goal is to maintain the principle of the balance of yin and yang.

This simple, yet all-encompassing principle of yin and yang is the foundation of tai chi. When practicing tai chi, we apply it to our posture, the forms we learn and push hands training.